Anev is my favorite character and the one I played the most. He’s got a rich history not only from UO but from other games. However, over time while in UO, I fleshed out a bit more of his background to add another depth to this character.

The Anev family, as I call them, consist of several characters that I play online. Two of these characters are Anev’s brothers…. 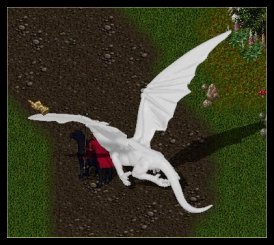 The Anev’s grew up in a world filled with diplomats and socialites. Kroll “Anev”, Shad & Tyler’s parents both worked and traveled the realm meeting, working and being entertained by some of the highest of royalty. Their mother Mytila, who had always had long flowing pure white hair, was a busy women and a fierce diplomat … she would not walk away from a table without the battle being won in her favor!

A fond memory of Kroll’s and something he reminisces about is one such meeting; “She had launched herself at a mighty Warlord during one of her diplomatic visits. She drew her sword and threatened to take his head off right in front of his own court if he did not bend to her needs, all the time calling him a ‘Raksasa’ (A foreign term for monster that she loved to use when ever challenged). She had moved so fast that not even the Warlords personal guards could react, she won the battle and walked out proud!” As much as Mytila could bring a Warlord to his knees, she never once would deny her children their happiness nor would she leave them behind in her journeys. Mytila was a fantastic mother to all her kids, she could turn heads at any gathering from her shear beauty yet strike fear in those who stepped in her way, then turn around and be the most loving person you have ever met.

Jeff Anev was a very well respected person and compared to his wife, Mytila, he was even tempered and plain … almost dull at times. He used words to fight his battles and never carried a weapon except for his magic. Even though Jeff was a great wizard, you never once saw him use his magic, raise his voice or insult anyone in any of his fathers meetings. But in private it was just the opposite. With the family Jeff was a stern man; he found it necessary to make sure each of his children understood the 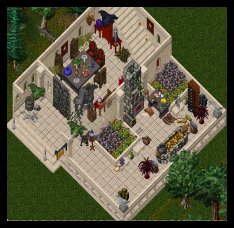 importance of respect and “one’s place” in the world. He made it clear that he was in charge our mother then followed and the “children” are at the bottom of the chain. It was not done out of anger, it was just how he was brought up.

Kroll, Shad and Tyler each spent far more time with dignitaries and royalty then they did with other kids their age. It was a good upbringing but also a sad one. Each of them cherishes the memories yet abhors the habits they picked up along the way! Shad most of all, he has recently taken it on as his mission to separate himself from the family and, as he puts it, “their vile ways”. Even though they admit that their upbringing was tough and isolated at times, Kroll, Tyler and even Shad are fawn of their one childhood and long-term friend. The Anev family employed a man to keep track of their private affairs. This person had a son named Midrick. It was Midrick who filled in for the brothers as their childhood friend for most of their upbringing. Now days, you find Midrick as Anev’s personal assistant and the maintainer of Anev’s small shop outside Yew.

As you travel the road to Yew from the Britain crossroads, past the Grove of Love, there’s a small clearing just on the bend North. In this small clearing, Kroll has setup shop. He decided a while back that they did not want to follow the steps of his Mother and Father in the world of diplomats but to do something more exciting for the common people. Kroll, along with several friends, opened “Anev & Company Vendor House”. This tiny little establishment holds many of the finds, creations and collection of items for sail to any who need them.

Recently, both of Kroll’s brothers suddenly re-emerged and returned home. Tyler, the youngest of the family, decided to take up the fine art of magery just like his father. Shad, second youngest, has decided that he shall enchant the world with music, song and storytelling. Shad and Kroll have never been close. They spend more time avoiding each other than is probably healthy but it makes for a calmer household. Shad has a true dislike of Kroll’s taming talent. In a nutshell, Shad believes he is following in his mother’s talent of animal control not Kroll. This fight has been going on since they were young lads … no end is in sight.

Kroll recently decided to move the family home and worked out a deal with another friend Gaton. Gaton owns some property outside Trinsic that use to be the home of the Romaq Guild. It’s a wonderful tower with lots of space for the Anev family to grow and expand.

So as you travel the regions and dungeons of Sonoma don’t hesitate to stop and start up a conversation when you run in to Kroll “Anev”, Shad (that is if he pays attention) or Tyler. Generally they are in good mood (except for Shad who rarely seems to be in a good mood) and they will usually stop and chat for a moment.