Hershey and Cocoa where my two boys and probably two of the most spoiled cats you would have ever found. They had over 20 toys, a playhouse, several private beds (one in almost every room) and full run of the house. They would not tolerate a door being closed and would make an issue out of it until you open it for them.

I received them from a nice family that had gotten two very large dogs. Hershey and Cocoa didn’t like the dogs at all so they always hid. The family gave me the cats in hopes that they would have a good home which must have been what they needed. As soon as I got them, they never hid ever again. They enjoyed being visible and in view.

After Stephen had moved out (an old roommate), he took his cat Chauncey with him. I had grown up with cats and missed having animals. When I moved in with Stephen many years ago, it was my first time to be around a house hold pet again but after he left, the companionship that his cat provided was gone and a vacant hole was left; Hershey and Cocoa filled that gap hundreds of time over. 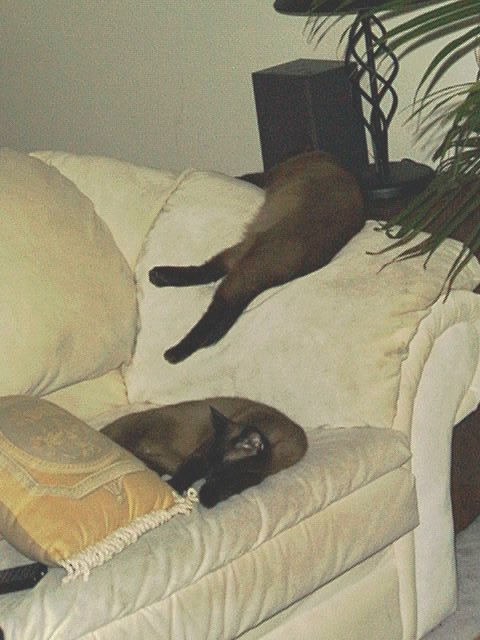 Hershey and Cocoa where very intelligent animals. They knew where all the good stuff was hidden and how to get your attention. Hershey seems to be the dominant one; he would challenge Cocoa for the best sleeping location and affection. He would always come when called and loved to play. He couldn’t tolerate something being hidden in a blanket and had to beat the heck out of it once discovered. Cocoa on the other hand was a very picky eater. He had decided that only one type of dry cat food is what he would eat. If you don’t get it or tried something else, he wouldn’t eat it and meowed until you gave in. Once I’d discovered this, I made sure to purchased his favorite food at all times. The first time I went to replace their food with the good stuff I had left it by their dish and a minute later, you found Hershey standing guard as Cocoa was literally ripping into the bag. They had a full dish of the “other stuff” but Cocoa wanted the good stuff and he wasn’t about to wait.

When we got them they where about six years old. They seemed very young and full of energy. Cocoa would not leave you alone if the food dish is less than three-quarter full. Hershey knew what time bedtime was and demanded to be rubbed for 10 minutes before either of you actually got to doze off. They know that when you wake in the morning it was “special” feeding time and they’d get some wet food. They spend at least an hour reminding you of this “special” time if you dared to forget. There where so many wonderful things about my kitties; I don’t have enough space to tell you. I even taught Hershey to kiss! It was very cute, you could walk up to him and ask for a kiss. He would points his little noise at your mouth and purr!

I could never begin to thank the family who gave me Hershey and Cocoa; they had been wonderful additions to my life. In the many years that I had them, my happiness and appreciation for the many creations on this planet has grown. Thank you for sharing in my experience and if you have animals, give them a hug.

Both Hershey and Cocoa are now gone. Cocoa passed away in 2005 from a hyperthyroid condition. It was incredibly difficult for me as Hershey wouldn’t leave his side. Once Cocoa moved on, Hershey did loose a bit of his spirit and you could always tell he missed his brother. In 2007, Hershey moved on. He had lost his sight and though he tried for many months to be happy, I think the loneliness finally got to him and he went to be with his brother. His health was failing, he would come down with colds very quickly yet each time he would recover. This last one took all his energy and though he tried to come back he finally let go and was gone one day while he slept.

I will never forget these two friends. They brought more in to my life from their love and affection that I will forever be touched with their presence. I miss them terribly and not a day has gone by where I don’t look over my shoulder and expect to see one or the other trailing behind me like they had done for so many years. They where about 12 or 13 when they moved on, they got treated liked royalty and I hope they felt like they where loved, there wasn’t a day that I didn’t look forward to seeing them and not a day has gone by without me remember them.